Dieter Marzinger was born on 18 October 1971 in Piet Retief (South Africa). Prior to his grave accident in May 2002 Dieter Marzinger was a karate trainer and teacher – he became tetraplegic (fracture at C5 / C6 vertebrae) because of a dive into a river. In November 2002 he made the first attempts at painting with the mouth. From the very start he painted on his own and was able to make considerable progress within a short time. The artist predominantly paints South African landscapes.

As with every scholarship holder’s paintings, also his artworks were assessed on a three years period. Thanks to the achieved painting level, the expert Jury of VDMFK proposed his membership starting from March 2017. 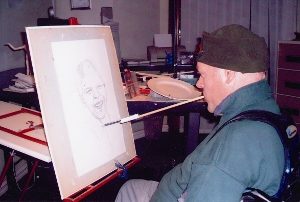