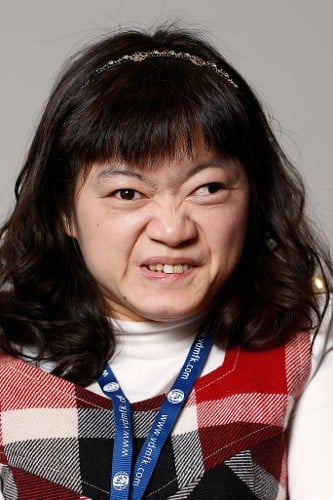 As her mother had to perform very hard physical work during her pregnancy, Shu-I Yang fell ill with hyperbilirubinemia one day after her birth. Because the attending doctor did not give her the necessary blood transfusion to treat the condition, she developed cerebral paralysis that among other things caused paralysis of the upper limbs. The deformation of her hands and feet impair her movements. As a consequence she is confined to the wheelchair and depends on her mother's daily care. From childhood on she had a predilection for nature and developed a passion for painting. She has overcome her congenital disability and skilfully uses two toes of her foot to write on the computer, play music and practise her artistic talent, i.e. painting. The artist attended elementary school for 5 years. Through television she came to know the artist Mei-Hui Chen (Full Member/Taiwan) in 1991, who gave her painting lessons. Due to her deep commitment she was able to markedly improve her artistic skills in a short time. This was also why she received a VDMFK scholarship from the Association in 1993. She became an Associate Member of VDMFK in 2008.

Her teacher Mei-Hui Chen taught her to paint flowers, birds and insects. Although her paintings are affected by her disability, they reflect an individual and special style. In 1994 she joined the painting studio "Zi Geng Nong" (= independent farmer) and was introduced to Chinese landscape painting. In 1996 she also received classes from a professor in recognition of her work. Subsequently Shu-I Yang was able to take part in numerous group exhibitions and to organise and hold solo exhibitions. As a result the artist received numerous prizes and awards for her artistic achievements.