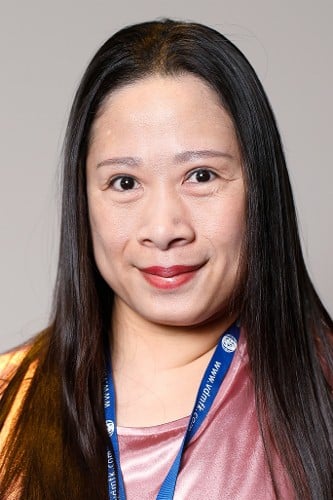 In October 1974, i.e. six months after her birth, En-Tien Yang was abandoned on a market. A social worker heard her crying and, much to the surprise and astonishment of the woman, the baby had no arms and one of her legs was shorter than the other. En-Tien was taken to a police station. Countless orphanages were contacted, but none of them was willing to take the child. Finally, the little girl was adopted by a priest.

Later, the different length of her legs caused her to develop scoliosis. She had to undergo very painful surgery with 8 holes being drilled for the purpose of attempting to correct her bone structure. When she was recovering, she started searching for something to do with her life. As she was interested in art, her foster father tried to find a teacher for her. From 1990 onwards, she has been supported as a scholarship holder by AMFPA. Since 2011, she has been an Associate Member of the Association.

She said: "For an abandoned orphan like me, it was a great blessing to come so far in life. At the beginning, the fact that I was different separated me from other people, and I developed a great fear of large crowds of people. Then I realised that I would have to face my fear to enable others to accept me. Thanks to art I can go and meet people every second of my life." In the meantime, the artist has had lots of success. She has presented paintings of animals and flowers in watercolours to the public on several occasions.