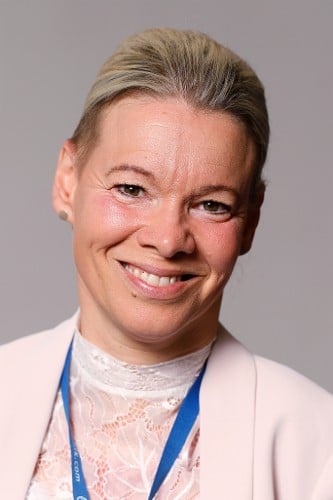 Ann Lund Wahlberg suffers from spastic paralysis since birth. After primary school she attended grammar school and then Aalborg University from which she graduated in February 1997 with a degree in social sciences. From early childhood Ann has carried out the activities of daily living with her mouth. That was also the reason why Ann Lund Wahlberg began to paint and draw with her mouth when she was only a youngster. In 1996 she had the first opportunity to show her works to the public at an exhibition. She became a VDMFK scholarship holder in the year 1998. This enabled her to spend more time painting as she also had a job as a social worker. It also provided her with the opportunity to attend courses at different art schools. In 2002 she decided to quit her job as a social worker and to dedicate herself to painting.

She became an Associate Member of the Association VDMFK in 2005 and she became a Full Member in 2007. Ann Lund Wahlberg likes to paint people, landscapes and flowers. She also creates abstract paintings full of symbolism. She prefers watercolours and acrylics as well as charcoal and crayons.