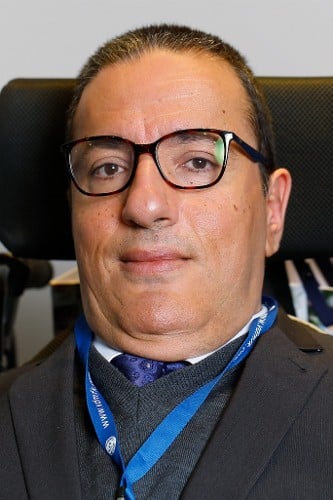 Giulio Volpin was born with deformed upper limbs (phocomelia). During his teenage years he discovered his passion for painting. He then tried to paint with his mouth. He taught himself the technique and progressed consistently, aided by his persistence and his will to live. Guided by Mario Barbujani (member of the Association) he perfected his talent.

In 1983 Giulio Volpin was granted a scholarship by the VDMFK. This enabled him to become more intensively involved with painting. In 2001 he became associate member of the Association. Of special significance are his still lives and flower motifs painted in oils, which Giulio Volpin creates using rich colours. These works have been presented to the public on the occasion of various personal and group exhibitions. In addition, Volpin has received several distinctions and awards for his extraordinary merits.

Today his teacher Mario Barbujani is also his friend. He describes Giulio Volpin's painting as follows: "His painting is nurtured by two things which are inextricably linked: the creative use of light and the powerful and bold colours, which make the brush which he holds with his teeth a tool of freedom - a wild fascinating freedom with a touch of melancholy."