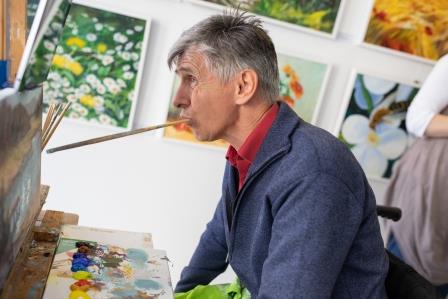 Željko Vertelj was born in Ljubljana on 26 July 1959. He spent his youth in the small village called Črni potok. He enjoyed drawing from a young age. He was also fascinated by nature, especially the forests, which he loved to paint. But after primary school there was no time for painting, as his job as a construction technician in forestry occupied him completely.

In 1993, Željko Vertelj was involved in a car accident that left him a quadriplegic. Friends gave him hope that he could continue to live a fulfilled life. He also wanted to be a role model for his sons, who were six and seven years old at the time of the accident. In 1994 he began to paint with his mouth with a lot of effort. Painting opened up a new world for him, a new profession and a new lifestyle. His talent was discovered. Since 1998 he has been supported by the association as a scholarship holder. In 2022, he became an Associate Member of the VDMFK.

Željko Vertelj prefers to paint with oil and acrylic. His preferred motifs include nature, but still lifes, views and portraits are also often found in his paintings.