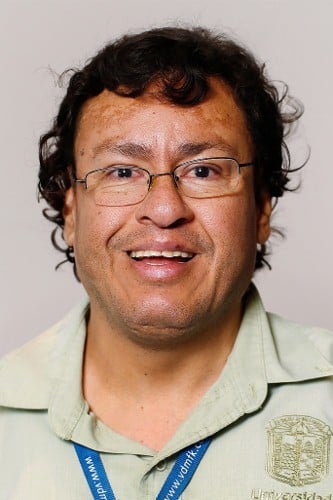 José Gerardo Uribe Aguayo was born without arms and with a deformity of the legs. He taught himself to paint with his foot at the age of six. After completing his schooling he enrolled at university to study philosophy and humanities, graduating as a licentiate in 1989. He also had the opportunity to attend drawing classes at the school of fine arts during this period, in which he acquired the basics of natural drawing. At the focus of this training were the techniques of painting in oil, staining and tempera painting. José Gerardo Uribe Aguayo received a scholarship from the Association in 1990. In 1993 José Gerardo Uribe Aguayo moved to Madrid for six months, where he sought opportunities to complete his training in painting. He registered as a student with an art school, attending courses in still life and painting from live models. The preferred subjects of José Gerardo Uribe Aguayo today are the landscapes of his homeland, flowers and still life compositions, which he paints in oils and watercolours. After having been accepted as an Associate Member of the Association in 1994, he was granted the status of full VDMFK membership only one year later. In the meantime he has been able to show his work to the public in numerous one man and joint exhibitions and has also received numerous honours and awards.