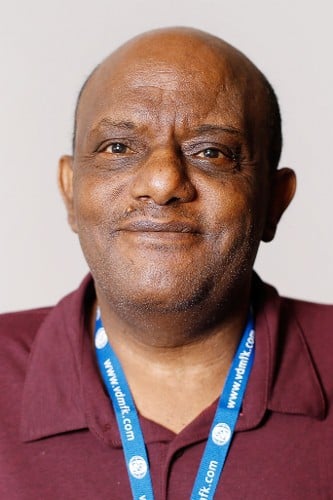 Weldgber Tekeste lost both arms as the result of a bomb explosion in 1977. He developed his great talent for painting in a rehabilitation and training centre in Switzerland. Some 10 years later he received a scholarship from the Association, which gave him the opportunity to present his work to the public. He was admitted as an Associate Member of the VDMFK in 2000.

Weldgber Tekeste paints with bold strokes of the brush. The colours form independent elements of his compositions, whether he paints a South Pacific landscape or the portrait of a native inhabitant. Weldgber Tekeste is not only a master of contemporary portraiture, but also produces softer, more emotional and almost romantic landscape paintings, such as his depiction of a house in the Swiss Alps in a gentle late summer atmosphere. Works such as this are the proof of his great talent and of his eye for fidelity to nature. Weldgber Tekeste has achieved many successes with his works at numerous exhibitions.