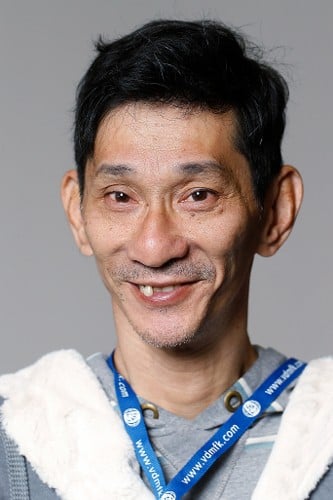 Tan Kok Leong suffered a serious injury of the cervical vertebrae after making a somersault, which resulted in the complete paralysis of all four of his limbs and left him wheelchair bound. With the greatest strength of will he taught himself mouth painting in 1988. One year after his first attempts at painting he received a scholarship from the Association, giving him the opportunity to intensify his commitment to painting. Two dominant stylistic elements can be recognised in the work of Tan Kok Leong. On the one hand his work is characterised by the classical Far Eastern tradition of painting, which can be seen in particular in his preferred subjects of mythological and fantasy scenes depicting monsters and good and evil spirits, but also in his watercolour studies of flowers and animals. On the other hand the paintings of Tan Kok Leong also reveal the influence of European and American art. Portraits are his favourite subjects and he has a special fondness for oil painting. He has also studied the technique of traditional Chinese painting, discovering his love of Chinese art in the process and putting the techniques he learned to great effect in his work. Tan Kok Leong has participated in numerous group exhibitions in Singapore and has also presented his work in one-man shows. He has been awarded prizes and honours for his painting, helping him achieve considerable fame in his home country.