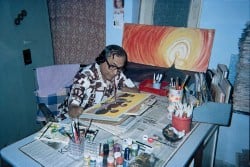 Jayantilal Shihora grew up as a healthy son of a grain merchant. At the age of 14 he lost both arms in an accident with a firework. He describes the months following as a "dark period full of depression". Five years after his accident he learned that there were artists who could paint with their mouth or feet. With perseverance and diligence he practiced drawing and writing with a pencil in his mouth. Soon afterwards he was able to control both a pencil and paintbrush in his mouth. In 1963 he received a scholarship from the association which gave him the opportunity to begin his studies of the fine arts. In 1964 Jayantilal Shihora won the first prize for his artwork. From that point on his paintings led him from one success to the other, and in 1994 he became an associate member.

Jayantilal Shihora mainly paints oil and tempera pictures. For the most part his subjects are from his Indian hometown. Inspired equally by European classical painters and Indian artists, Jayantilal has developed his own distinctive style. At first he painted landscapes and sea scenes. For some time now he has concentrated on traditional Indian art. Jayantilal Shihora has already received numerous prizes and awards for his pictures which has also led to frequent reports about him by the dia.