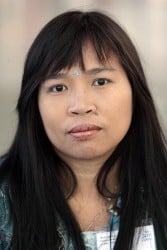 Patricia Jane Saerang was born without or rather with deformed limbs. Already as a young child she learned how to carry out all important tasks with her foot. In elementary school she started doing a painting course. She has a natural talent for painting and was therefore awarded the first prize in a painting competition with participants from all over the region of North Sumatra as early as in 1981.

Patricia Jane Saerang draws and paints with her right foot just as well as her colleagues can with their hands. Like most artists from Eastern Asia she is committed to the tradition of the great Chinese art of painting. In addition to painting classes held by the painter Barli Sasmita, Patricia Jane Searing attended several courses in the Chinese technique, which profoundly influenced her painting style.

In 1989 she was granted a scholarship by the Association and it was only six years later that she became an associated member. This gave Patricia Jane Searang the opportunity to show her works to the public at exhibitions. She has organized numerous exhibitions in the Indonesian capital Jakarta. In addition, she works as a painting and crafts teacher to pass on her knowledge to other people.