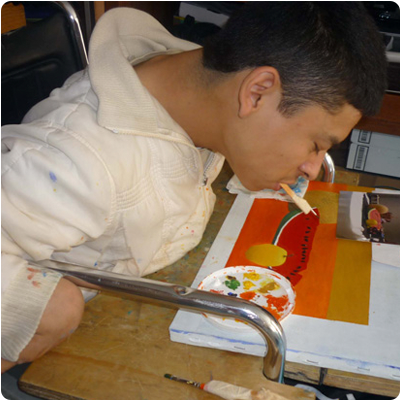 Omar Rios Martinez was born on 16 July 1989 in Hidalgo in Mexico. Since birth he suffers from a motor disability called infantile cerebral palsy. When he was 18 months old his parents discovered that Omar Rios Martinez did not show age appropriate development. After an examination at the hospital a disability was discovered, which made different types of therapy necessary. His father made a wooden playpen for him where he could move around playing football. In grade two in school he found that he could to write using his mouth. In secondary school he attended workshops for fine arts where he learned different techniques such as: embossing, glass etching, oil painting, high relief, etc. After six months he entered the first painting competitions. He completed secondary school in three years and passed with distinction. He decided to train as a manager's assistant. In the framework of different school activities he has participated in various events such as the PYME exhibition. He painted on windows, was involved in verre églomisé, created artwork made from crystal, produced oil paintings and high-relief works.