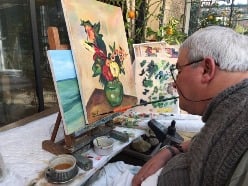 Lionel Planchenault was born in Paris on 18 February 1955. He left primary school in Year Five and attended a ‘Lycée d'enseignement professionnel’ - a technical secondary school. In 1972, he obtained the ‘Certificat d'aptitude professionnelle’ (certificate of professional competence) as a plumber. He began working for a craftsman in Paris on 1 July 1972. On 27 July 1972, Lionel was hit by a car while riding his motorcycle. The accident left him a tetraplegic. A long and painful period of rehabilitation ensued. Now, at the age of 17, he had to learn to live without them. In 1976, on the advice of his physiotherapist, he started teaching himself to paint. He had been supported by the VDMFK as a Scholarship Holder since 2017. Three years later he became an Associate Member of the VDMFK family.

Lionel’s favourite motifs are landscapes of his French homeland. Here, he mainly paints in oils.