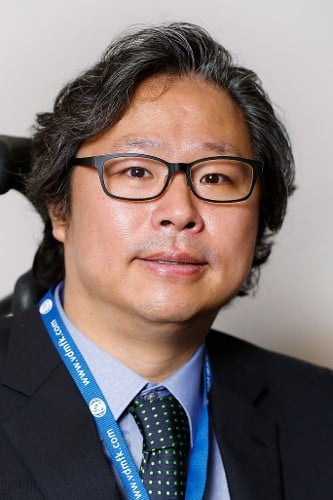 In 1991 Jeong Park fractured his 4th and 5th dorsal vertebrae in a swimming accident. This resulted in permanent paralysis of his arms and legs and confined Jeong to the wheelchair. In 1994 he read a report about the publishing house in South Korea. After contacting the publisher and receiving the requested information he started to paint with his mouth. It was only two years later that he became a Student Member of the Association. This afforded him the opportunity to receive painting lessons once a week, enabling him to continuously improve his painting skills and thereby also his work. He became an Associate Member of VDMFK in 2007.

Jeong Park predominantly paints in oils and watercolours. From time to time he uses mixed media as well as pencils and acrylics. His favourite themes are flowers in every combination, landscapes from his native country and portraits. The mouth painting artist has already shown his works at well-known galleries in his country on several occasions.