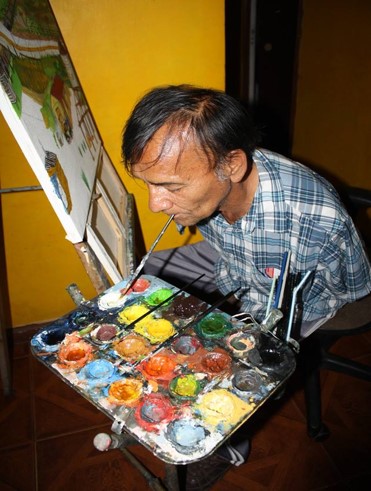 Guilhermo Enrique Muñoz Aguilar was born on 3 July 1958 in Santiago, Recoleta. As the son of a poor family he was forced to work already as a child in order to contribute to the family income. As a consequence he took different jobs and finally became a reinforcement specialist. On 7 July 1998 he suffered an electric shock of 13,800 Volt at work. Thus he burned both his arms and a large part of his body. Both arms including the shoulder joints had to be amputated at the level of his shoulders. After the accident he started to paint with his mouth in 1998 as part of therapy, and he was able to make significant progress within a very short period of time. The artist had the opportunity to present his mouth painted artwork at several exhibitions, such as at the national congress, cultural centre of Quilicura. The media reported about the mouth painter on various occasions.