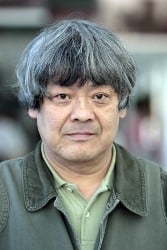 When he was 10 years old, Kiichiro Mizumura lost both arms in an accident. Soon afterwards he began to draw and paint with the mouth. To improve his skills he attended a painting course taught by a well-known Japanese artist. In 1965 the VDMFK granted him a scholarship which enabled him to become more intensively involved in painting. In 1973 he became full member of the Association.

By applying very fine dots and strokes with his brush Kiichiro Mizumura gives shape to his enigmatic townscapes. His favourite motifs include canals, bridges, lock gates and boat harbours. He uses different techniques such as oils and tempera as well as mixed media. Kiichiro Mizumura has found his personal artistic style following old Japanese traditions. Among other things, the paintings of the artist were shown in a state art exhibition at the "Art Museum" in Tokyo. In addition, he has contributed to numerous exhibitions around the world.