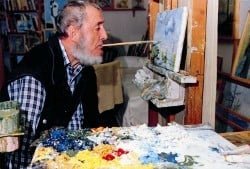 Reinhard Melzer has suffered from spastic paralysis from birth and he can hardly move his hands. Although he spent many years of his life in institutions his family is very important to him. Already while at school Reinhard Melzer discovered his ability to write and paint with the mouth. That is why it is not surprising that painting very soon became his hobby. He was able to dedicate more of his time to this hobby when he became a scholarship holder at the VDMFK in 1962. Today he studies mouth painting on his own and with the help of art teachers and other professional artists whom he contacts. His moving to a small flat in Berlin made it possible for him to study even more intensively on his own. It was a great personal success when he was granted permission in 1975 by the former East German association of artists to work as an artist and sell his paintings. Since 1980 he has had numerous exhibitions. He was able to present his works to the public at Güstrow cathedral, at the Deutsche Theater, Dresdner Bank, in various town halls and at the gallery of the Künstlerhof in Berlin Buch. Reinhard Melzer became member of the VDMFK in 1992. He is very fond of experimenting and paints realistic and abstract motifs in oils and water-colours.