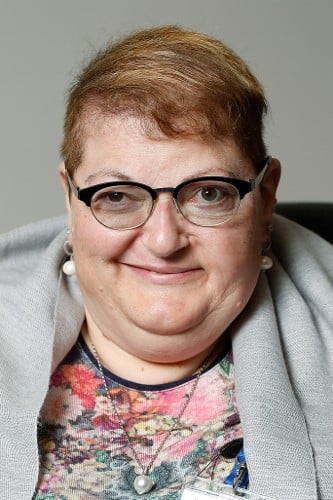 Due to a polio vaccination Natalina Marcantoni became ill at the age of 11 months. The paralysis affected both lower limbs and, therefore, confined her to a wheelchair. From that moment on until the age of 18 she spent her life in various institutions. She attended compulsory school and a 3-year course for ceramic painting. Afterwards she began to paint ceramics and did this job, which became her passion, for six years. She displayed her objects of art at various exhibitions.

The association became aware of Natalina Marcantoni through a newspaper interview. She was contacted and from that moment on she began to paint pictures. In 1989 she received a stipend from the VDMFK. After receiving the status of an associate member of the association in 1993, she became a member of the VDMFK just three years later. In doing so, she was given the opportunity to show her works of art to the public in numerous exhibitions. In 1996 she hosted her first one-woman exhibition in a cultural center in Verona which was a great success.

An art critic referred to her works as an encounter with painting and poetry. She knows how to tell poetic stories with color. Her pictures convey a feeling, a passion, a zest for life. With her art Natalina Marcantoni knows how to touch the depths and our drowsy soul. The colors of her bouquets of flowers and her landscapes have a therapeutic effect on everyone who encounters them with reformed and tolerant spirit.