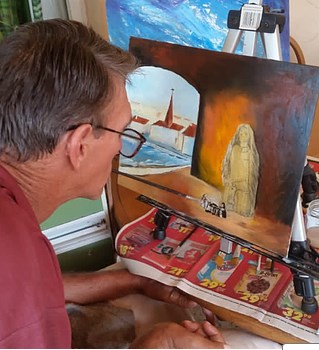 Born on 2 April 1959 in Bethal (South Africa). He held a diploma in gold mining with the authorisation to conduct subterranean blasting. Later he changed profession and became a private security professional who was employed in national security at strategically important locations. In October 1989 he broke his neck (C5/6) on a water slide. A man landed on his neck when he - together with a number of people - landed in a small pool at the foot of the slide. In late November 2002 he heard about mouth painting. He has been taking private lessons for some time.