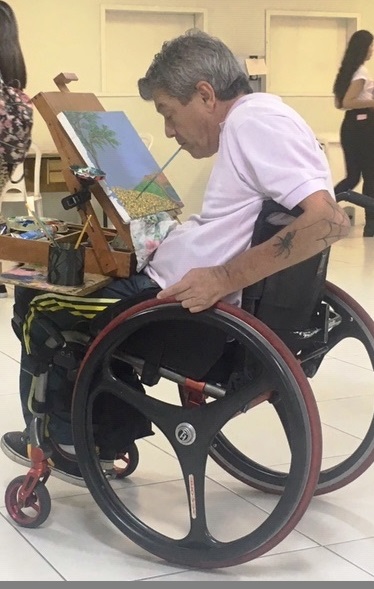 Jefferson Maia Figueira was born on 18 April 1962 in Rio de Janeiro. After his military service and a technical course he decided to embark on a career as a professional diver. In 1987 he was the victim of an assault. He was shot in the neck and suffered an injury to the spinal cord that resulted in him becoming tetraplegic. In 1992 he became involved in swimming for people with disabilities as a part of his rehabilitation. Later he took a course in diving for people with disabilities. Today he works as a volunteer for the association for the promotion of scuba diving for people with disabilities (HSA-Brazil) and takes part in different social projects in conjunction with diving for people with disabilities. Furthermore he works as an adviser for different projects launched by institutions for the disabled, such as for example at the "Centro de Vida Independete do Rio de Janeiro (centre for an independent life)" and helps to promote wheelchair rugby in Brazil. As Jefferson Maia Figueira has had strong ties to art since his childhood - his aunt was an artist and he always admired her painting - and as he made the acquaintance of VDMFK student members Marcelo da Cunha (mouth painter) and Carlos Eduardo Rosa Fraga (mouth painter) he decided to have a go at mouth painting. His artistic progress did not go unnoticed and he has been able to present his mouth painted oils and acrylics at various exhibitions.