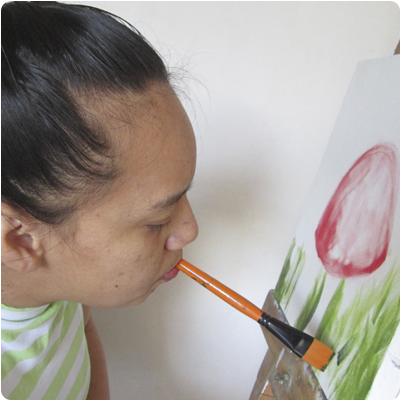 Miriam Luna Arizmendi was born in Zacualan on 13 May 1980. She suffered from infantile cerebral palsy at birth and will be unable to use her upper or lower limbs for the rest of her life. She attended primary and secondary school as well as upper secondary school at the "IUL Instituto Universitario Libertad". In addition, she received a diploma in psychology through an online course at the "Fray Luca Paccioli" university. In August 2011, she embarked on her undergraduate course of studies in psychology. In 1991 she began writing and later, in 2004, painting with her mouth. Because she took great pleasure in painting, she spent two years developing her artistic ability under the guidance of Arturo Paredes Correa. In February 2010 she even opened her very first gallery under the name "Sol y Luna, Galería de Arte y Cibercafé" ("Sun and Moon, Art Gallery and Cybercafé"). A wide array of recognitions by governmental agencies and associations testify to her creative urge. For example, she received inter alia a national award for her participation in the art concours of the "Youth Institute of the Federal State of Morelos" in January 2009. In addition, she has held a number of exhibitions and motivation talks.