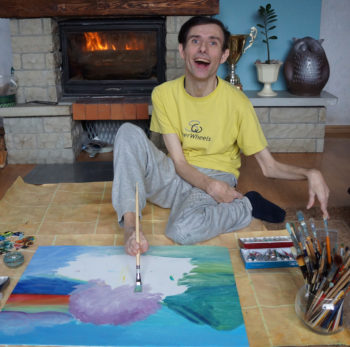 Mr. Meelis Luks was born on 21 February 1968 in Rapla/Estonia. Due to a rhesus conflict his blood had to be exchanged 30 hours after his birth. At the age of 10 months the artist was examined by a neuropathologist, who diagnosed a brain trauma which interferes with the function of his limbs. The attempt at undoing the brain damage was not successful. The footpainter is only able to walk on his knees, he has no use of his hands and cannot talk. His mother, a primary school teacher, began to teach her son at home. In autumn 1985 the family of the artist moved to Kaiu, where Meelis finished school in the ninth form. Meelis Luks has already contributed to various exhibitions. The artist is now learning to use a computer. He is very interested in languages and music.