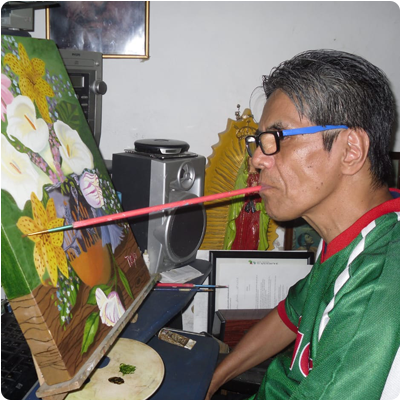 Jorge Ignacio López Rayo was born on 3 January 1960 in Guadalajara, Jalisco. He visited the Porfirio Cortes Silva, Urbana 225 primary school. Afterwards, he worked. Poverty was very present in his family. They had to share their house with other families. At the age of 17, Jorge Ignacio decided to go to the United States, in order to work in San Francisco with his brother who already lived there. He stayed for two years. At 19, he moved back to the city of Guadalajara. He wanted to open a laminate shop and a paint shop but, a couple of days before his 20th birthday, he had a car accident and became a quadriplegic. It was a difficult time which was full of pain. Thanks to his mother, he was able to overcome this. Five years ago, he met Edgar Vazquez who is also a quadriplegic. This man introduced him to Saul Lopez Montanez, an artist with the association of mouth and foot painters. At this meeting with Saul Lopez, Jorge Ignacio could see how he painted beautiful pictures with his mouth. After the meeting, he enrolled himself in the Angel Carranza School in San Pedro Tlaquepaque, where plastic art, crafts and trades are offered. He is very happy that painting allows him to create something beautiful.