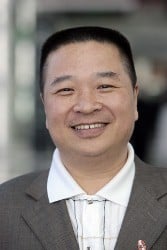 Jingsheng Liu has always loved painting. In 1978, he suffered an electric shock at work. As a consequence both his arms had to be amputated. In order to start a new life he dedicated himself to painting. In 1980, he returned to his former employer who hired him as a librarian in his company. Moreover, he started to paint with his mouth. At the beginning, Jingsheng Liu specialised in calligraphy. In 1985 he joined the Association for Calligraphy and Painting for the City of Bejing. In the course of the years, he started painting soft aquarelles using the traditional Chinese painting style. In 1988, he received an VDMFK stipend. At the same time, he started studying at the University of Changchun. In 1992, he became an associated member of the association. As of 1994, he took further training courses at the painting academy. Five years later, he attended the course "calligraphy" at the Pedagogic College of Shoudu. He is a member of the Association for Calligraphy and Painting of China. Jingsheng Liu masters the art of Chinese calligraphy and the style of traditional Chinese painting based on brushwork without focusing on the details. His brushwork is simple, beautiful, sedate, and creative at the same time. He prefers motifs from the animal world. For the Chinese expert these paintings show allegories with deep-lying wisdom and meaning. He has presented his work at exhibitions in America, Japan, Austria, and Korea. Moreover, and has organized several solo exhibitions in different places.