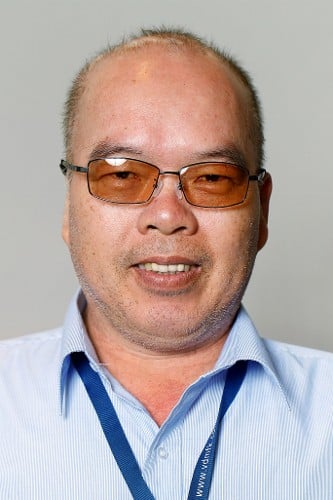 After completing school Yu-Chen Lin studied civil engineering at a technical university and took an engineering degree in 1987. In 1991 Yu-Chen Lin had a grave electric accident on a construction site, which resulted in his arms having to be amputated above the elbows. He also lost his hearing. Encouraged by his family and friends, he started to learn to do mouth painting in 1994. Subsequently he became increasingly involved in calligraphy and painting. Henceforth he strove to improve his artistic skills. In 1998 he became a Student Member of the Association. He was granted Associate Membership of VDMFK in 2010.

Today painting has become part of his life. With his mouth he copies canonical writings and writes recitations of Buddhism, paints Guanyin-Bodhisattwa (the goddess of empathy), as well as traditional Chinese landscapes, flowers and birds. Thus his life changed from black and white to a colourful life. In 2008 Yu-Chen Lin learned to do oil painting from a teacher. With the big toe of his right foot, he holds crayons and is able to use them swiftly. He can both use his mouth and foot. For his artistic achievements he won the honorary title "Disabled Person of Distinction" in Taiwan. He received prizes for his paintings in Taiwan and Japan.