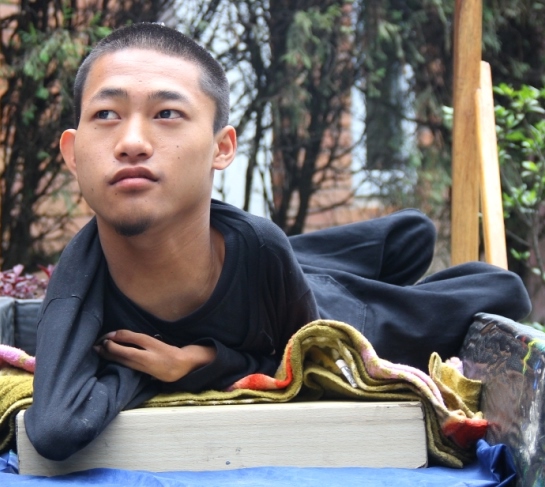 Amir Lama was born on 3 March 2000 in Kathmandu, Nepal. He was born with arthrogryposis multiplex congenita, which affects all four of his extremities. Amir Lama is the oldest of three siblings. Due to his severe handicap he is reliant on the help of his family, with mainly his mother and grandmother caring for him. Amir Lama attended school up to the 5th class. As he was very often alone at home, he began singing and painting with his mouth. After the severe earthquake in Nepal in April 2015 the Karuna Foundation Nepal, a partner organisation of UNICEF, became aware of Amir Lama and his talent. They took him to a hospital and arranged for him to have medical examinations and treatment. Based on the examinations, he was provided with a trolley, and he is no longer reliant on his family's help all day long. The Foundation enabled Amir Lama to take singing and art lessons. He enthusiastically paints pictures of the nature and landscapes of his home region. In May 2016 his pictures were shown at an exhibition.