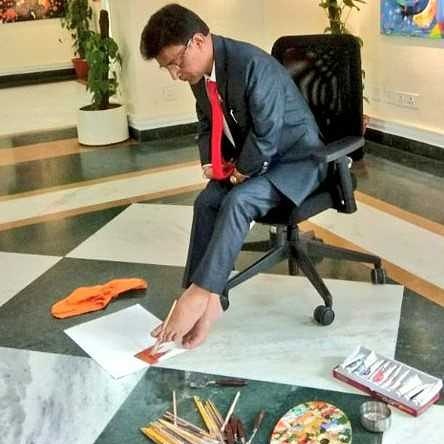 Uttam Kumar was born in Maouri, Udhampur on 2 February 1979. He has been physically disabled in both his hands and arms and in his right leg from birth. At the time he was diagnosed with a form of polio. Later, when he was admitted to the village school, he found it extremely difficult to hold a pen with his feet because his upper limbs were completely paralysed. Uttam practised writing with his left foot whenever he had time. Eventually, he started to paint and draw. He participated in a painting workshop for the first time when he was in the fourth grade and managed to sell his first picture there. He gradually honed his artistic talents and managed to take part in several exhibitions. Up to now he has received 14 awards from governmental organisations and NGOs for his artistic achievements. For example, he was awarded a gold medal by His Excellency the Governor of Jammu and Kashmir.