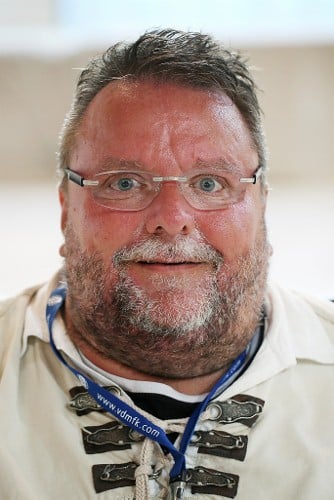 Markus Kostka was born on 1 June 1967 in Wiesbaden. In 1983, at the age of 16, he had a grave bathing accident in Italy that rendered him tetraplegic (C3 - C5). While still at the hospital, he discovered that he was able to paint with his mouth. The renowned watercolourist Sybille Salzeder recognised his talent and gave him lessons in watercolour painting for two years. After his accident the mouth painter completed school and took his A levels. Subsequently he studied psychology at the university of Regensburg and graduated in 1998. For many years the artist has been working at the university of Regensburg as a pure research scientist in the field of traffic safety, with focus on "Man-machine-interaction". From 2008 he received a scholarship from VDMFK. In 2011 he was awarded the status of Associate Member of VDMFK.

Markus Kostka is still a devoted watercolourist. The artist predominantly paints animal portraits of all kinds, because as he himself once said: "Especially with animals I find a mixture of motivation, emotion and joy which lend expressiveness to my portraits." Markus Kostka has had success with his works at numerous exhibitions.