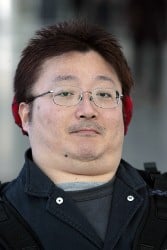 In 1979, when Hironori Koshoji was 16 years old, he injured his cervical vertebrae in an accident during a physical education lesson, leaving him paralyzed from the shoulders down. At the advice of his therapist he made his first attempts at mouthpainting which were the start of a new passion. Already two years after his accident he received a scholarship from the Association and with it the opportunity to dedicate himself intensively to painting. In the year 2000 he was awarded the status of an associate member of the VDMFK.

At the beginning, Hironory Koshoji concentrated on caricatures, painted with a pencil. Later on, he became interested in other painting techniques such as oils and watercolours and regularly took lessons with an academic painter. At the moment he studies intensively representational painting, especially fairytale portrayals. In the course of the years he has taken part in several very successful exhibitions in Japan.