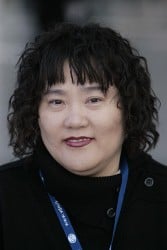 Mrs Hiroko Kimura became paraplegic when she was two years old. Since then she has used her left foot to carry out all her tasks. She taught herself how to write, draw and paint with it. In 1964 Hiroko Kimura started taking art lessons. It was only one year later that she was granted a scholarship by the Association. In 1970 she became a full member of the VDMFK.

Today Hiroko Kimura works with the traditional forms and themes of Japanese painting and is highly competent in this field. The artist paints delicate motifs that depict mythological scenes, landscapes with staffage figures, flowers and animals. She became known in her country through her numerous exhibitions in Japan. The media have done a story about her several times. Thanks to her membership in the VDMFK she has been able to make her work accessible to a broad public in her home country Japan and abroad. The artist has also participated in exhibitions all around the world.