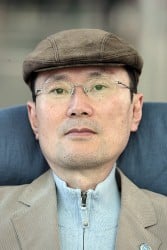 Young-Soo Kim studied architecture and worked in a drawing office for a year. He was unable to continue his work because a disease of the muscles (progressive muscular dystrophy), which had begun to manifest itself three years earlier, was becoming ever more severe. Having enjoyed painting since his childhood he now began to paint with his hands until he was forced to abandon this activity five years later because his muscles had become too weak. One day he saw a woman engaged in mouth painting in a television programme and a few days later he tried this out for himself, finding that it gave him the greatest pleasure. This discovery proved to be a remarkable experience, motivating him to engage in intensive training. Young-Soo Kim was given a scholarship by the Association in 1993, becoming an Associate Member of the VDMFK only three years later. Since that time the mouth painting artist has participated in numerous group exhibitions and he has also been frequently able to fulfil his dream of holding one-man shows of his work. The flower motifs, fishing boats and landscapes by Young-Soo Kim are painted in an individual naturalistic style, with his shoreline scenes, painted in very dark, almost black tones with very little colour being exceptionally impressive. Young-Soo Kim principally uses  watercolours in his work.