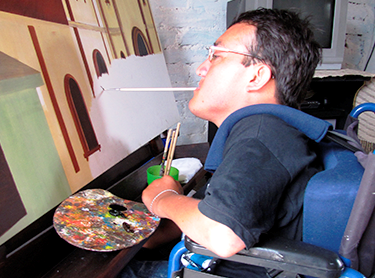 Luis Eiber Jiménez Bolaños was born on 20 June 1985 in El Tambo (Cauca). Since the age of six he has been tetraplegic on account of a gunshot injury. One day he went hunting with some family members and walked in front of his cousin who was carrying a loaded gun. When a shot went off accidentally, Luis Eiber Jiménez Bolaños was shot from a distance of some six meters and hit at the level of the fifth cervical vertebra. As a result he no longer has any use of his limbs. In 1998, as a way to pass the time, he began to use his mouth to take hold of things within his reach. So he took hold of a pencil with his mouth and initially just scrawled on the pages of a notebook. Due to his constant efforts he initially learned to write with his mouth. Later on he worked out various effective painting and drawing techniques with his mouth. The artist prefers landscapes and animals done on materials of all kinds.