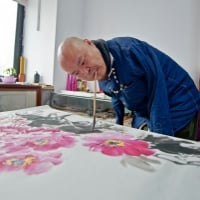 Mr Huang Guofu was born in Chongqing on 9 June 1970. In 1974, at the age of four, he lost both arms as a result of an electric shock. Despite these adverse circumstances, Mr Guofu completed his primary education, and after several years of self-study also completed his secondary education. At the age of twelve, on his own initiative, he began practicing how to paint and create calligraphy with his mouth. In his youth Mr Guofu subsequently had the honour of studying painting in depth under great masters of art. In his twenties he studied under some very famous Chinese artists such as Wang Yiyang, Chen Mo, Hu Yichuan and Lin Chenghan, to name just a few. He was therefore able to learn several different painting styles and is also quite familiar with brushwork as far as the “ink and water” painting technique is concerned. As a result, the VDMFK granted him a scholarship as of 2015. Mr Guofu’s works have already been collected by hundreds of people, both in his home country and abroad. He had the opportunity to attend the 2010 World Expo in Shanghai and presented a large number of his paintings. Many other exhibitions and awards also testify to his exceptional creative ability and drive. The artist’s choice of motifs is highly diverse and includes, among other things, birds, animals, landscapes, and typical buildings in his hometown of Chingqing.