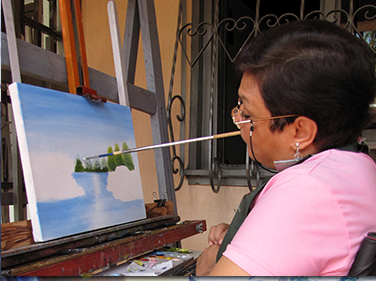 María Helena HIGUERA was born on 5 August 1960 in Cucúta (Norte de Santander) in Colombia. She is the youngest of three siblings. She attended the primary school Colegio la Presentación in the same town. She also took part in fashion and dressmaking workshops, did courses on white goods, porcelain, ceramics, lingerie, textile painting and card design. On 5 February 1995 she had a car accident. The initial diagnosis was that she only had one more week to live. Nevertheless she had two operations that were successful. However, she remained tetraplegic on account of an injury of the spinal cord at the level of the sixth and seventh cervical vertebrae. It is a permanent disability due to which she cannot use her upper and lower extremities and most of her body normally. Even while still very young she had developed a passion for painting and drawing. She took part in organised competitions, as a result of which and due to a television programme she began to paint with her mouth two years ago. She received advice from painters Luis Ariel CRIOLLO Roldan, student member of VDMFK, and Belisario GOMEZ PEREZ, student member of VDMFK. The two painters have similar disabilities and they have been pursuing careers in painting for many years. This work became a therapy for her, helping her to overcome her sadness, anxiety and depression. Her greatest desire in this new chapter of her life is to win recognition for her work from her family, friends and acquaintances. That would be a personal triumph and proof that a disability is not in the body but in the mind of people. In addition to painting her activities include reading and music.