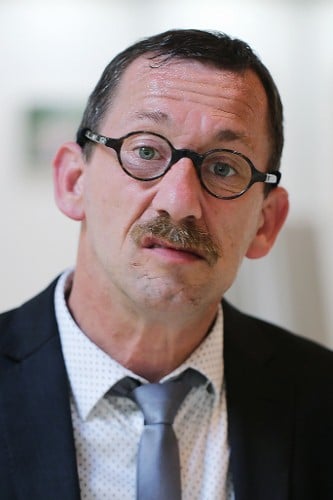 The arms and hands of Henri-Clairy Hembert were paralyzed right from birth. Due to complications during birth he is only able to clearly express himself with great difficulty. For this reason, he has made every effort to use his feet instead of his hands since his early childhood years. At the age of four he began to paint with both feet which is why Henri-Clairy Hembert is said to be an autodidactic artist. During his youth he spent several years at the Institute for Motor Training in Amiens. He was also admitted to hospitals in Paris several times. He later received his diploma in computer accounting from a vocational secondary school.

Over the course of time painting became a means for Henri-Clairy Hembert to express and share his fears and joys. He never knows beforehand what he is going to paint. "One must observe and be very intuitive. When I go for a walk, I absorb the scenery into my inner self," is how he personally describes his art. In this connection, he finds meaning in both realistic style and, preferably, abstract painting. Each picture he paints is like an adventure for him. Several strokes are enough to allow depth to develop, and all of a sudden the whole thing begins "to fly", as he puts it.

Henri-Clairy Hembert's artistic talents enabled him to become an Associate Member of the Association in 2000. He has been a Full Member of the VDMFK since 2013.