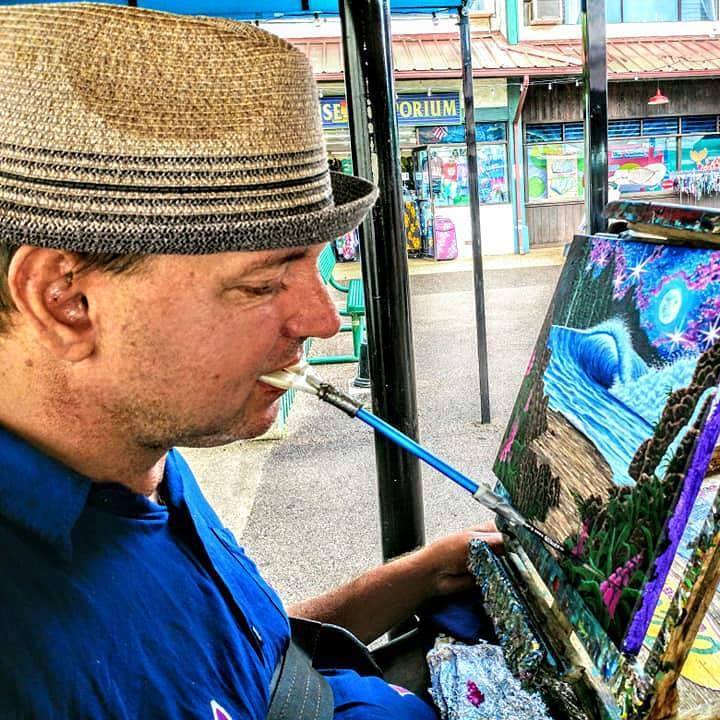 Moses Kai Hamilton was born on 6 January 1976 on the north coast of the garden island of Kauai. Mo, as he is known to his friends, had a carefree early childhood. Art always played a huge role in Mo's life. He started sketching at a very early age and stuck at it until the fateful day of 18 October 2002, when he suffered severe spinal injuries in a car crash. He became a quadriplegic. This was a tragic, life-changing event for Moses. At first he could not even breathe unassisted and needed a respirator. During this period he was given an introduction to painting with the mouth. This reawakened Mo's passion for art. Moses explained that his first efforts at painting were frustrating; his figures lacked form and definition. But by investing a lot of effort he developed a personal style, using round, expressive figures to show the journey travelled by the Hawaiian people, and how they live and love. Moses paints with his mouth; he has next to no movement below his neck. He is dependent on his family, who help him to prepare his paints, move the brush and adjust the canvas and/or the light. Moses enjoys life to the full with his family and friends on the north coast of Kauai. His artworks can be seen in many shops and galleries across the island of Kauai.