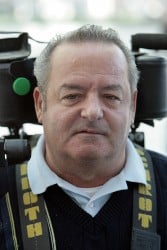 After attending primary school Josef Habeler became a bricklayer. He also worked as a excavator operator. In December 2000 he fell off a tree and suffered a dislocation fracture of the cervical spine. He can no longer use his arms or legs. A several-week-long stay at the hospital was followed by nine months of rehabilitation. In July 2001, during the rehabilitation period, he realised that life could be worth living again. He discovered a different side of his life to which he did not have access previously - painting with the mouth. It fascinated him to such a degree that he became caught up in it. Mouth painting helped him to bear his fate and even made him forget it for hours. Josef Habeler soon made great progress. By coincidence he heard about the Association of mouth and foot painting artists and was made a Student Member in 2004. In 2010 he became an Associate Member of the Association.

Initially Josef Habeler did painting on silk cloth and silk scarves. Soon he became interested in watercolours. Recently he has had a go at acrylics and oils. Among the mouth painting artist's main themes are landscapes. On the occasion of nationwide exhibitions Josef Habeler has had the opportunity to present his artwork to a broad public on various occasions.