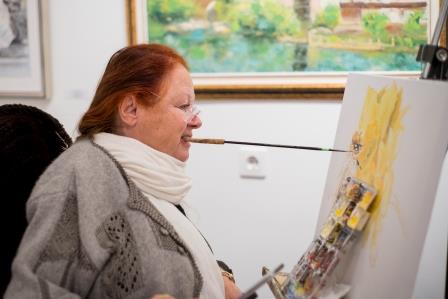 Ms Neda Gorjanec was born on 24 October 1949 in Ljubljana. She was born with spinal muscular atrophy. In 1980 when her health deteriorated she began to paint with the mouth. The artist became a student member of VDMFK on 1 September 1989 but was expelled on 31 December 1998 as it was discovered that she was able to paint with her hands. As Ms Gorjanc's condition has recently worsened significantly due to the progression of her disease, she is now only able to paint with her mouth. Her current artwork was created with the mouth (President Eros Bonamini has seen her paint with her mouth). That is why she is now applying for readmission. Her preferred themes are animals done in oil.