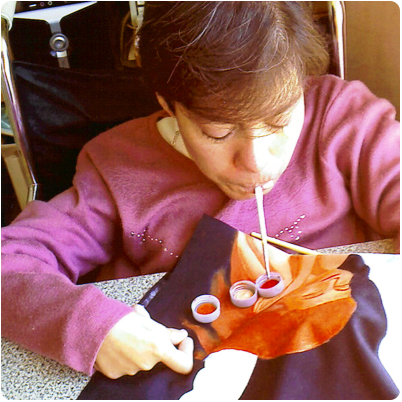 Leticia Estrella González was born on 22 December 1969 in Ixtlahuaca in Mexico. When she was eight months old it was discovered that she was not strong enough to sit up. This was the start of innumerable visits to the doctor, hospital stays, medical examinations, queries, discoveries, doctors and pains - of both physical and psychological nature. After six years a doctor told her mother that they could not do anymore for her. She was given a wheelchair and spent all her time at home. Her sisters taught her to read, write and do sums. At the age of nine she started school and was immediately put into grade three. After serious blows to the family, she and her mother and her siblings moved to a city. She decided to turn her life into something positive; she learned English and how to use a computer. After several professional challenges she received a scholarship for a course in textile painting. She loves to paint because it enables her to create her own reality. She has regained her faith in life as well as the enjoyment of life.