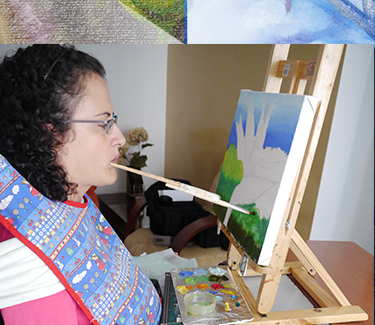 Luz Delty Gonzalez Carrillo was born on 5 October 1971 in Málaga, Santander (Colombia). After attending primary school, she studied English and administration in Bogotá, which she successfully completed. Later, she completed a degree at the University of Cundinamarca, in the course of studies "Professional health care" in Girardot. Before her internship Luz Delty Gonzalez Carrillo worked as a volunteer in the countryside, where she trained the population in first aid, and worked with young people. During this time, she was selected for the obligatory social service in the Marines in Bahía Solano, Chocó. During her time there, she was the victim of an attempted murder by a marine infantryman, who tried to strangle her. Her spinal cord was injured at the height of the cervical spine (C4-C5), and as a result she became a tetraplegic. At the suggestion of her neurosurgeon, she executed her first brush strokes with her mouth, in the course of occupational therapy in the military hospital. There, she came into contact with the VDMFK scholarship holders and mouth painters Helio Hernando Hurtado and Emiss Belba Caldas, who encouraged her in her endeavours, to improve as an artist. VDMFK scholarship holder Luis Ariel Criollo put the artist in contact with her current painting teacher Carlos Para (visual artist), who strongly supports the mouth painter.