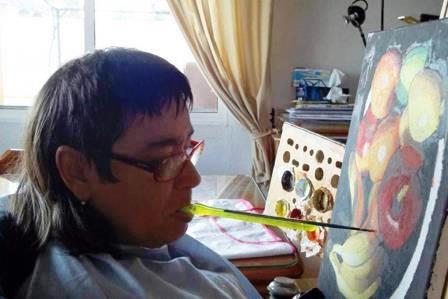 Maria Pilar GANCEDO was born on 23 February 1971 in Madrid in Spain. She is the third of four children of a humble family and was accepted with great effort and sacrifice on the part of her parents. She was brought up like her brothers, a fact which makes her very proud, because thanks to them she is not a spoiled girl. It has helped her all her life because she sees life more realistically and normal. Due to a lack of oxygen at birth she suffers from cerebral palsy, more specifically, from tetraspastic cerebral palsy which affects the motor cells. This means that she is only able to move her head purposefully. At the age of ten she started to paint in school. She painted until the age of 16 and then stopped because school took all her time. In 2004 she began to paint again and has always painted using her mouth, since, as already mentioned, she can only perform precise movements with her head. As she did with many other things, she taught herself to paint. She currently paints in oils as it is her preferred medium of all those that she has tried. She frequently paints landscapes with water, either the sea or a river. Sometimes she paints geometric forms, but she paints all kinds of themes. Besides painting, she enjoys going out with friends, she travels, reads and likes to work on the computer.