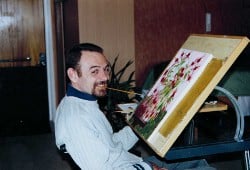 In 1976, one year before graduating from High School, Hisham Dgheim had a diving accident which left him quadriplegic, with his arms and legs completely paralysed. In 1982 he started painting with his mouth, a skill which he taught themselves. In 1983 he moved to Sweden, where he further developed his painting skills by taking private lessons and attending seminars.

Hisham Dgheim often chooses nature and landscapes as subjects for his works, with special focus on his country of choice. Again and again he paints winter landscapes and the coast thick with snow, with the black outline of a forest and the black edge of a rock at the entrance to a cave. The procession of penguins outlined against the snowy mountains of a fjord in the far north is also one of his favourite subjects.

In 1986 Hisham Dgheim was granted a scholarship by the Association. In the year 2000 he became associate member of the VDMFK. This also gave him the opportunity to participate in exhibitions and show his work to a broad public. Not only the well-chosen themes and conceptions, but also the artist's skilled use of colours fascinates the viewer. The colours of his paintings are strong and independent and still fit perfectly into the painting.