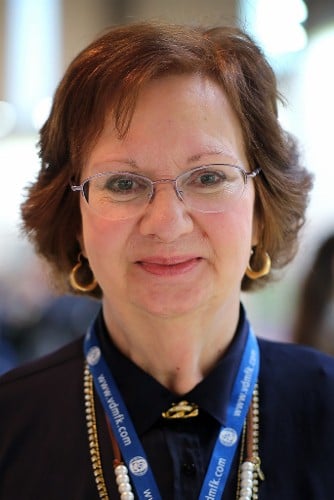 Maria de Lurdes Ferreira de Oliveira was born without arms. That is why she learned to use her feet for the activities of daily living at a very young age. Already while in school she discovered her passion for drawing and painting. As a teenager she heard about the Association of Mouth and Foot Painting Artists Worldwide and became an AMFPA scholarship holder in 1965. On 1 March 2004 she was granted the status of an associate member.

For many years Maria took lessons in painting and drawing with two well-known artists in her home country. This enabled her to improve her artistic skills and in the course of the years allowed her to take part in various exhibitions. Her work has won great praise and she has been awarded different prizes and distinctions. She has also received wide media coverage. She has given interviews to magazines, newspapers and TV stations. On the occasion of a visit by Pope John Paul II to Portugal she presented him with one of her paintings. With great affection she keeps a letter from the Pope where he blesses her and thanks her for the painting. In addition to painting she does the housework in her home, and she likes to do embroidery and to read.