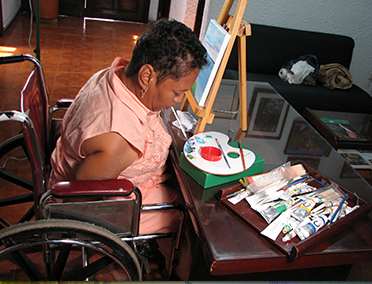 Since birth, Lucy Chow Davis suffers from multiple deformities of her extremities, a condition which is called arthrogryposis. She has no use of her arms and only limited use of her legs. From early childhood, the artist, who is widely known today, has been involved in painting (using her mouth and one foot). At the beginning she taught herself, later on she had lessons with an academic painter. On the occasion of the "International Women's Day" Lucy Chow Davis received an award for her achievements from the ombudsman in San Andrés on a recommendation of the municipality. She has also participated in several exhibitions and workshops.