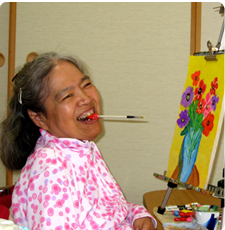 Seiko Chino was born in Nagano on 21 September 1941. She has suffered from cerebral palsy since birth. Totally unable to move her limbs, she began to write and draw with her mouth as soon as she entered school. In 1982 she took up painting on a serious scale and was taught the basics by a well-known art professor.

The mouth painter has already contributed to a number of exhibitions.