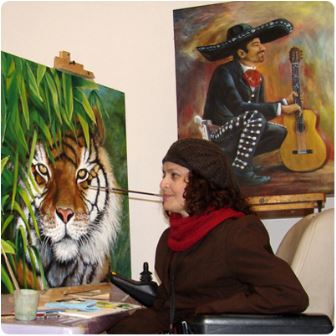 Lidia de Jesús Chaidéz López was born on 14 March 1970 in Culiacán, Sinaloa, in northern Mexico. She attended primary and secondary school. In April 1983, she was involved in a serious car accident which resulted in quadriplegia. She remained paralysed from the chest down and has been confined to a wheelchair ever since.

Through the support of a locally based disability association, she was able to complete secondary school in 1992. She then attended a pre-university preparatory course for a year before going on to study social psychology, which she completed in August 1997. From 1999, she worked for 18 years as a public servant in the disability office of the local municipality. Lidia de Jesús Chaidéz López has been married since 2004.

In 1996 Lidia de Jesús Chaidéz López began to devote herself intensively to painting. She has loved to draw since she was a child and at the age of 16 she created her first mouth-painted works. From 1998, the VDMFK granted her a scholarship. She has been an Associate Member of the association since 2022. Lidia de Jesús Chaidéz López's favourite motifs include animals, people and flowers as well as motifs from her homeland. She paints mainly in oils.