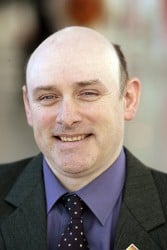 After finishing his schooling at the age of 16, David L. Cawthorne worked as a miner. During this time he began to play Rugby League with his work colleagues. In February 1981 he suffered an injury to the spinal column during a game and since then has been almost completely paralysed. During physiotherapy and movement therapy he learned to use his mouth to carry out the activities otherwise done by hand. This also brought him into contact with mouth painting for the first time. He acquired increasing skills with a few months' practice. His family and friends asked him to paint pictures for them, increasing his dedication and leading to considerable progress in his mouth painting.

Only nine years after his accident, David L. Cawthorne was given a scholarship by the Association. He was very proud of this scholarship, which constituted a great honour for him. After only a further eight years, he became an Associate Member of the VDMFK. This allowed him to intensify his painting work, a welcome development since he had learned to enjoy this activity. He uses a variety of motifs and subjects, but prefers to paint the landscape of his home region. His numerous works have already often been shown to a broader public through joint exhibitions.