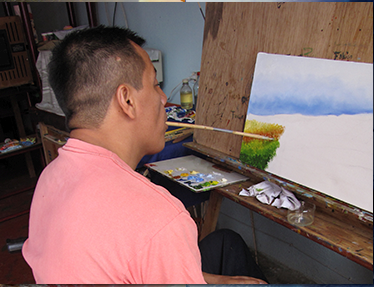 Fabian CASTILLO ORTIZ was born on 23 October 1969 in Cartagena del Chaira Caquetá in Colombia. He grew up as the son of a family of modest farmers with excellent principles and values. At the age of 22 he went to live with his aunt in Bogotá to escape from forced recruitment by illegal armed groups. He did various jobs. On 19 August 1996 his life took a drastic turn on account of an accident. He wanted to dive into a swimming pool but crashed headfirst on to the sand. He suffered an injury to his spine with luxation of all vertebrae. After his accident he spent three years in Bogotá at different rehabilitation centres, hoping to regain some mobility. But after receiving the exact diagnosis it was very difficult for him to accept that he would henceforth need a wheelchair and depend on other people. In early 2000 he returned home to his father for financial and health reasons. He knew that he would be a burden to his father, as his father at the age of 70 did not have any funds because he had lost everything on account of the violence in the country. His future was uncertain year after year. In search of new horizons and opportunities, Fabian moved in with his parents-in-law and his brother in 2006. About a year ago, he received financial and moral support and therefore had the opportunity to take lessons at home, twice a month, from Carlos Parra Duarte, student member of VDMFK, who has passed away in the meantime. Mr Luis Ariel CRIOLLO Roldan, student member of VDMFK, is the role model for his life. The moral and financial support that he received was very important to him. Six months ago he met Mr Belisario GOMEZ PEREZ, student member of VDMFK, who offers him orientation and moral support. Thanks to these two student members, he sees life from a different perspective and with more enthusiasm today. He would be very happy if he were admitted to VDMFK.