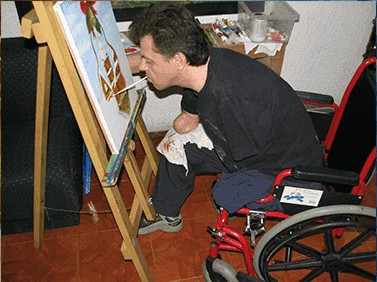 It was in June 1987 that the grave accident occurred: Alvaro Cadena Gutierrez was going to help a friend make some girders for a company. While working he got entangled in a 14,000-volt cable. He sustained such severe burns to his arms and legs that his upper limbs and his lower left leg had to be amputated. In January 2005 he began to paint with his mouth. Initially he taught himself to paint with the help of books and television programmes. Later, he had the opportunity to take lessons from Bob Rosse.