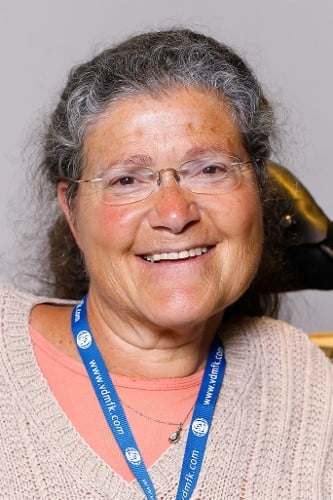 At the age of two Daniela Brafman fell ill with poliomyelitis. She is confined to the wheelchair and had to learn to perform everyday tasks with her mouth. At the Hebrew university in Jerusalem she studied Arabic and history of the Islam. Later, she studied at the Tennessee academy of art in the USA. She then worked as a language teacher of Arabic at primary schools in Jerusalem. Furthermore Daniela heads the centre for the promotion of an independent life. She has two daughters.

As occurred with many disabled people, painting opened up a new world where she found self-expression and social response. The artist is autodidact. In 1976 Daniela Brafman was granted a scholarship by the Association. In 1992 she became an associate member. She became a full member of the VDMFK on 1 March 2002. She paints with very economical strokes and great stylistic force. In her works she uses very simple and available means at hand such as crayons, ball-point pens and the like. In her works one feels the artist's dynamic personality. During her long career as an artist she was able to repeatedly participate in exhibitions at home and abroad.